Evonne Goolagong Cawley, AC, MBE is an Australian former World No. 1 tennis player. She was one of the world’s leading players in the 1970s and early 1980s, during which she won 14 Grand Slam titles: seven in singles (four at the Australian Open, two at Wimbledon and one at the French Open), six in women’s doubles, and one in mixed doubles.

Evonne Goolagong was born in Griffith, the third of eight children and grew up in the small country town of Barellan. Her parents are members of the Wiradjuri people.

In 1965, Vic Edwards, the proprietor of a tennis school in Sydney travelled to Barellan to take a look at the young Goolagong and immediately saw her potential. He persuaded Goolagong’s parents to allow her to move to Sydney, where she attended Willoughby Girls High School. Here, she completed her School Certificate in 1968 and was at the same time coached by Edwards and lived in his household. 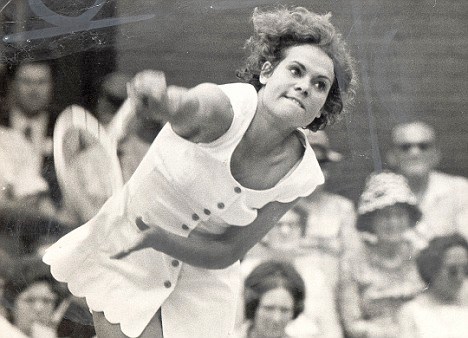 During the 1970s, she played in seventeen Grand Slam singles finals, a period record for any player, man or woman.

She is the only mother to have won the Wimbledon title since Dorothea Lambert Chambers in 1914. Married to Roger Cawley in 1975, she had a daughter in 1977 and won the 1980 Wimbledon title.

Goolagong Cawley was ranked number one in women’s world tennis for two weeks in 1976, though it was not reported at the time because incomplete data were used to calculate the rankings. This was discovered in December 2007, 31 years later.

In 1985 she was inducted into the Sport Australia Hall of Fame. In 1988, Cawley was inducted into the International Tennis Hall of Fame. In 2018 Gooolagong Cawley was advanced to a Companion of the Order of Australia “for eminent service to tennis as a player at the national and international level, as an ambassador, supporter and advocate for the health, education and wellbeing of young Indigenous people through participation in sport, and as a role model”.

Goolagong Cawley was a member of the Board of the Australian Sports Commission from 1995 to 1997 and since 1997 has held the position of Sports Ambassador to Aboriginal and Torres Strait Islander Communities.

In 2016 she and ten fellow Australian tennis players were honoured by Australia Post as the recipients of the 2016 Australia Post Legends Award and appeared on a postage stamp set named Australian Legends of Singles Tennis.

The Evonne Goolagong Cawley Trophy, awarded to the female champion at the Brisbane International, is named in her honour.

Cawley runs an annual “Goolagong National Development Camp”, with the aim of encouraging Aboriginal children to stay in school through playing competitive tennis.